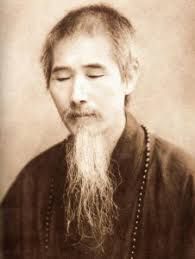 "Hsu Yun was a renowned Chán Buddhist master and one of the most influential Buddhist teachers of the 19th and 20th centuries. He is often noted for his unusually long lifespan, having allegedly lived to age 119."

Please post any information about, pictures of, or teachings from Master Hsu Yun in this thread.
Top

Astus kindly sent me this link to some of Hsu Yun's teachings earlier:

You can get a pdf version of his biography here as well as from Amazon but alas, not Shambhala.

"Even if you practice only for an hour a day with faith and inspiration, good qualities will steadily increase. Regular practice makes it easy to transform your mind. From seeing only relative truth, you will eventually reach a profound certainty in the meaning of absolute truth."
Kyabje Dilgo Khyentse Rinpoche.

"Only you can make your mind beautiful."
HH Chetsang Rinpoche
Top

Wow, without the beard he looks 30.
Equanimity is the ground. Love is the moisture. Compassion is the seed. Bodhicitta is the result.

Here is his Song of the Skin Bag:

May all seek, find and follow the Path of selflessness.
Top

This blog post has a marvellous account of a conversation with Hsu Yun, and also this great photo:

'Only practice with no gaining idea' ~ Suzuki Roshi
Top

I see he was a vegetarian, which may have helped, but most of all the good mind.
TheDhamma.com
Dhamma/Dharma Wiki
Dhamma Wheel forum
Dharma Paths forum
Dharma Wheel Engaged forum
Top

This Master did not merely reach a very old age, but did so in spite of being nearly beaten to death by the Communists. Cannot recall the exact year, but he was well over 100 when the commies began to beat him more than one time (maybe 3?), while he was in prison. Each time he was left for dead but recovered.

jeeprs: Great interview with the Master, who clears up, as a Master does, the 'difference' between other-power & self-power or Pure Land & Chan.


“Why insist so much on this difference?” [Master Hsu Yun] asked. “You know that in reality there is nought but the One Mind. You may choose to regard it as in you or out of you, but “in” and “out” have no ultimate significance whatever – just as you, Mr P’u, and I and Amida Buddha have no real separateness. In ordinary life, self is self and other is other; in reality they are the same.

May all seek, find and follow the Path of selflessness.
Top

Will wrote:This Master did not merely reach a very old age, but did so in spite of being nearly beaten to death by the Communists. Cannot recall the exact year, but he was well over 100 when the commies began to beat him more than one time (maybe 3?), while he was in prison. Each time he was left for dead but recovered.

You mean he was beaten again?! Poor guy...

When Hsu Yun was fifty-six, the Abbot Yue Lang of Gaomin Temple)in Yangzhou was going to convene a continuous twelve-week session of dhyana meditation. Preparing to leave, the group asked Hsu Yun to go first. After reaching Di Gang, he had to cross the water, but had no money. The ferry left without him. As he walked along the river's edge, he suddenly lost his footing and fell into the rushing water, where he bobbed helplessly for a day and night [10] and was caught in a fisherman's net. He was carried to a nearby temple, where he was revived and treated for his injuries. Feeling ill, he nevertheless returned to Yangzhou. When asked by Gao Ming whether he would participate in the upcoming weeks of meditation, he politely declined, without revealing his illness. The temple had rules that those who were invited had to attend or else face punishment. In the end, Gao Ming had Hsu Yun beaten with a wooden ruler. He willingly accepted this punishment, although it worsened his condition.

For the next several days, Hsu Yun sat in continuous meditation. In his autobiography, he wrote: "[in] the purity of my singleness of mind, I forgot all about my body. Twenty days later my illness vanished completely. From that moment, with all my thoughts entirely wiped out, my practice took effect throughout the day and night. My steps were as swift as if I was flying in the air. One evening, after meditation, I opened my eyes and suddenly saw I was in brightness similar to broad daylight in which I could see everything inside and outside the monastery..." But he knew that this occurrence was only a mental state, and that it was not at all rare. He did not become attached to this achievement, but continued his single-minded investigation of the topic, "who is mindful of the Buddha?" over and over again, he delved into this topic without interruption.
http://en.wikipedia.org/wiki/Hsu_Yun
Top

I heard last week that Ven. Jing Hui, one of Master Hsu Yun's last living direct disciples, passed away.
May the legacy of the Buddha, Dharma and Sangha continue, for the sake of all sentient beings.

Glad this thread is here. What an inspiring, pure dragon of a human being.
Know that in a remote place in a cloud-covered valley
There is still a sacred pine that passes through the chill of ages.

I find Master Xuyun to be an absolute inspiration. His longevity is remarkable. I'm not sure if it's mentioned in any of the works by/about him, but what did his food and drink consumption consist of ? Obviously diet and mild exercise, as well as a meditative discipline, is a major contributor to his longevity.
Top
Post Reply
12 posts • Page 1 of 1

Users browsing this forum: No registered users and 3 guests