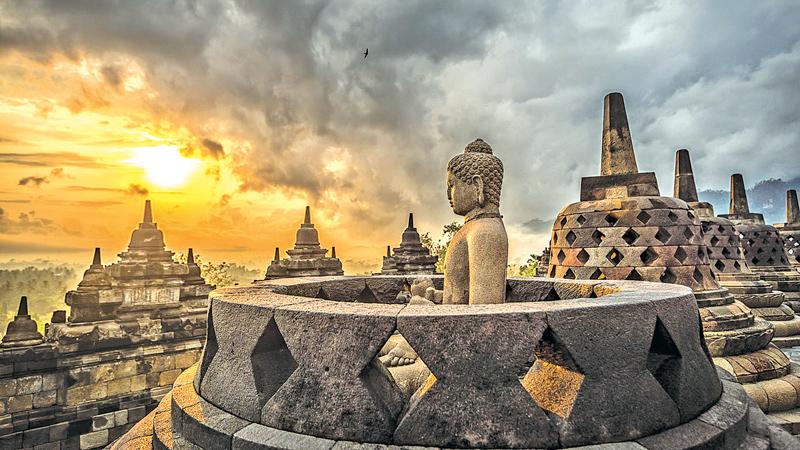 Anyone seen a detailed Buddhist explanation of the symbolism of this mandala in stone? No archeologists please.

I know, in general, that the life of Buddha is portrayed in carvings, based on the Lalitavistara Sutra. There is also supposed to be representations of Sudhana's bodhisattva path, from the Avatamsaka Sutra.
May all seek, find and follow the Path of Tathāgatas.
Top

It’s vajrayana mandala. At the time they had Kalachakra, Guhyasamaja, Hevajra, Chandra tilaka, Ganipati and others. This my be a general representation of mandalas
Vajra fangs deliver vajra venom to your Mara body.
Top

Borobudur is a multileveled structure with no interior spaces. The ten levels of the structure are said to correspond with the ten stages of the bodhisattva according to Mahayana doctrine. These ten levels can be further divided into three sections representing the three realms as taught in Buddhism.

The stone reliefs of Borobudur show exquisite levels of craftsmanship and also give us an insight into the mythology and stories which the people of ancient Java had adopted. While from a distance each side of Borobudor looks the same, once the stories on each panel were identified, it became clear that visitors were meant to approach from the east and in keeping with tradition, to circumambulate clockwise around the monument. For the sake of length I will mention three sets of the illustrations which adore the walls of Borobudor. We should keep in mind the conditions that the people of ancient Java would have had to work under to complete these splendid pieces of art. For one they would have had to be completed using only manual hand tools. We can be sure that as a heavy-trade society that the hand tools which they had would have been of a decent quality. Certainly the royal rulers who sponsored the construction of Borobudur would have used their position to acquire the best materials and conditions available at the time . Nonetheless, we should appreciate the effort and labor that went into these illustrations.
The life of the historical Buddha Shakyamuni is illustrated in 120 stone panels on one of the lower levels of Borobudur . That people so far away, both in miles and centuries would commemorate the Buddha’s life in such a way, truly is a testament to the Buddha’s greatness. The scenes portrayed come from the canonical text, The Lalitavistara Sutra which portrays the entire span of the Buddha’s life.
Another level of Borobudor illustrates the Jataka tales, or the stories of the Buddha’s past lives. These stories are like the Aesop's Fables of the east and are often used as children’s stories to teach morality and conduct.

One of the tales portrayed tells that in one of the Buddha’s previous lives, he was born as a Rabbit who taught his other animal friends about generosity. One day the god Indra appeared to the animals disguised as a Brahmin who had been separated from his caravan. Hungry and alone, he was offered food by all of the other animals. The Rabbit though, having nothing to offer, chose to throw himself into the fire to be cooked.
The higher levels of Borobudor depict scenes from the Gandavyuha Sutra which is itself one section of the longer Garland Sutra (華嚴經) which also became the basis of one of the major schools of Chinese Buddhism. It tells the story of a boy, Sudhana who went to many different master seeking spiritual teachings, eventually ending up meeting the bodhisattva Samatabhadra and also going to the heaven of Maitreya. John Miksic points out an interesting observation which is that while the focus of this text in China was the part which told of Sudhana’s visits with the different masters. The people of Java, on the other hand clearly found more meaning in the part of the story which tells of the heaven. In fact, the pilgrimage part of the story is only portrayed in 126 of the 460 illustrations. It is interesting that two different cultures encounter the same story and both decide that a different part is the important part.
Top

While the lower levels of Borobudur depict scenes from the Buddhist sutras, the top terraces of the monument indicate an advance knowledge of Tantric Buddhism. It is on these terraces that we find three circles of stupas which surround the central and top stupa. Inside each of these stupas is a statue of one of the Buddhas and each statue belongs to what are called the Five Buddha families These five Buddhas, which can be distinguished by their hand gestures , are very important deity’s in Vajrayana Buddhism and are also featured in many depictions of the Buddhist mandalas which can be found in the Himalayas and Japan.

Among the 504 Buddha statues found at Borobudur, the two deities which occur most frequently are the bodhisattva Vajrasattva and The Solar Deity, Vairochana. Vairochana is one of the main characters in The Garland Sutra and both of these deities also appear together in an esoteric text called The Mahavairocana Sutra. It has been purposed by scholars and students of Buddhism that the key to understanding Borobudor is to be found in The Mahavairocana Sutra.

I would like to establish that there is a very clear connection between the esoteric Buddhism of ancient Indonesia and the esoteric Buddhism which still exists in Japan up to the modern day.
The clearest connection can be found by looking at what Shingon-shu practitioners assert about themselves. Namely the eight patriarchs who are asserted to be the founders of their sect. This list begins with the same two deitys who dominate the top level of Borobudor, that is the two deitys from the main text of the Shingon-shu sec, that is Vairochana and Vajrasattva. Also included in the list of founders are the monks, Amoghavajra (不空) and Vajrabodhi (金剛智), both of whom are known to have traveled to Java.

Amogavajra’s most important disciple was Huiguo (惠果), considered to be the seventh patriarch of the Shingon-shu. Huiguo was a fairly well reknowned teacher of esoteric Buddhism and he himself had several students from Java. And it was Huiguo who taught Kobo-Daishi the practices of Vajrayana which were later imported to Japan. Particularly, it was from Huiguo that Kobo-Daishi received the practices of the mandalas and the teachings of the Vairochana Sutra.
So we can see clearly the connection between the Vajrayana Buddhism of Indonesia and the Vajrayana Buddhism of Japan. And this connection becomes even more obvious when looking at the painted mandalas and religious art of the esoteric schools of Buddhism of Japan.
Top

This book is very good for learning how the symbolism corresponds to the texts:
Kandahjaya, Hudaya. The Master Key For Reading Borobudur Symbolism. Bandung 1995

Also should look at this. It cites the book I mentioned above
http://www.shin-ibs.edu/documents/pwj3- ... odward.pdf
Top

Taught or was taught?
Top

Taught or was taught?

My understanding is he taught there. Maybe he was taught there also.
Vajra fangs deliver vajra venom to your Mara body.
Top

His teacher there was Serlingpa.

Apparently there are indonesians included in the lineage prayers of the kalachakra practice.

Apparently there are indonesians included in the lineage prayers of the kalachakra practice.

Fortyeightvows wrote: ↑
Mon Aug 20, 2018 4:54 am
This book is very good for learning how the symbolism corresponds to the texts:
Kandahjaya, Hudaya. The Master Key For Reading Borobudur Symbolism. Bandung 1995

Also should look at this. It cites the book I mentioned above
http://www.shin-ibs.edu/documents/pwj3- ... odward.pdf

48Vows wrote "the key to understanding Borobudor is to be found in The Mahavairocana Sutra."

Not certain, but I think this is a translation of that sutra:

the key to understanding Borobudor is to be found in The Mahavairocana Sutra.

I'm not an expert, but that is what alot of people say.

The links I posted give a pretty good review of the literature which is depicted on the monument. Obviously the garland sutra was a big influence as well.
Top
Post Reply
13 posts • Page 1 of 1

Users browsing this forum: No registered users and 7 guests