Building merit for my cats

Discuss the application of the Dharma to situations of social, political, environmental and economic suffering and injustice.
Forum rules
Post Reply
11 posts • Page 1 of 1

Building merit for my cats

Hey all. I have two wonderful tortie cats. The three of us are bound together very tightly by karma. They were shelter cats. I got them the day after my old (17 years old) cat died. They had been brought in separately, but both were kittens and thus the shelter staff had shoved them in the same kennel. They had the good fortune of coming into our family, where economic euthanasia is not acceptable - especially since the smaller one had contracted pneumonia. She required a hospital stay that ran up a bill of nearly $3000 dollars. They are not sisters, but I feel they were in a past life. 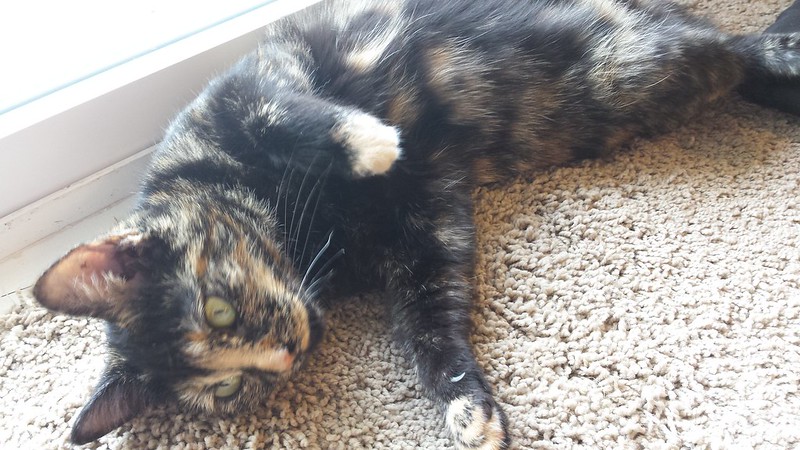 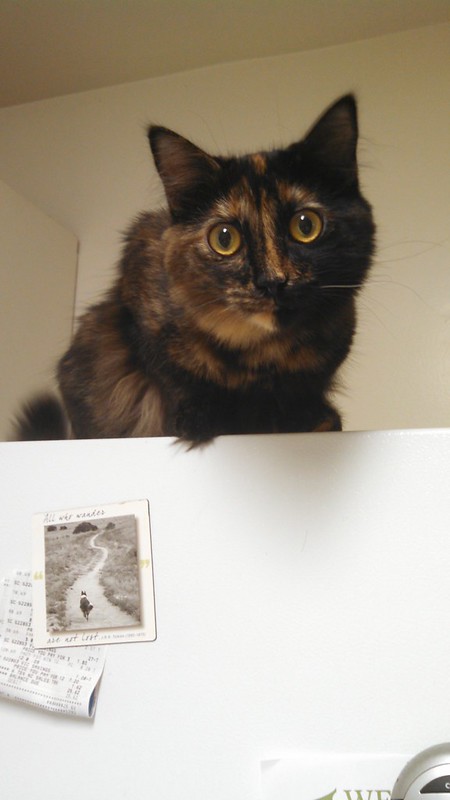 So I am asking for ideas on how to help them improve their karma. I do think they have excellent karma already (all the cats that come into my family do). They have an incredible amount of (for lack of a better term) self-awareness compared to other people's cats. They are also (I know this is hard to believe) compassionate. They certainly display a great deal of compassion towards one another, and again towards me. Sinnamon (the small one in the top picture) is especially loving towards other cats, though they rarely return the favor...

While Liquorice is incredibly loyal to me.

I already have purifying mantras over the doorways, and I let them come and go during my practice. I also do my best to encourage their loving behavior. I don't have to worry about them killing things. Not only are they indoor cats, but they don't seem to have the "killer instinct" that others do. It's true that they will swat at or chew on hapless bugs (I rescue these when I catch them), but they actually don't seem to realize that the millipedes and grasshoppers they torment are alive. A small grass snake got in once, and they were both crowded over it, prodding it delicately with their paws (no claws!) and sniffing it. They knew it was alive and were incredibly curious. But they didn't use their claws or their teeth. They were very gentle. (In case you're wondering, I scooped the little guy up in a lidded pot and released him in the trees behind the next building.)

Could read this here at the FPMT site. How to Benefit Animals
I should be meditating.
Top

I have mantra cards over many of the doors in my house, and in particular above spots where the cats must go every day to eat or hit the litter box. All the critters (I feed the birds outside, I have a dog too) hear me when I'm practicing. I whisper mantra over their food as well. I've read that it's good and helpful to show the pets Buddha-images to plant useful traces in their mindstreams, but I haven't been able to confirm that.
Read the full text of DGA's dissertation, a cultural history of mindfulness, here
Top

lorem wrote:Could read this here at the FPMT site. How to Benefit Animals

That's a good one. Lama Zopa's advice on how to benefit animals is excellent I think. I believe he recommended a recitation of Lam-rim prayers to animals, for example. I used to recite the Foundation of All Good Qualities to my dog, Cora, every day for a few years. She passed away few months ago. Her death was beautiful (just reminisced about it with my grandmother this morning). It was peaceful, and in some strange way, joyful... (sounds weird, I know

It sounds you have wonderful cats! My cat is a similarly compassionate one. He does no harm to other animals, even when they come near him. I have once witnessed (and photographed) him staring eye to eye with a rabbit without even touching it. He especially likes to smell frogs and lizards that sometimes get lost on our porch. Usually he sits besides me when I meditate, and I have once actually caught him staring at a picture of Shakyamuni Buddha. I think our cats are proof enough that all animals indeed have a buddha nature.

Personally, I read him certain easy-to-understand sutras (such as the Lotus Sutra), as well as explain him with my own words about the true nature of being. He appears interested enough for me to continue teaching him

Sorry for the huge image, couldn't find a spoiler option anywhere. My cat's race is sacred cat of Burma. "What we have now is the best. He who can never be satisfied is a poor man, no matter how much he owns.

Oh wow, he's so fluffy...he looks like Maxwell, my parents' cat - a similarly mindful kitty! Max unfortunately hunts, but he's very protective of our other cats, like he's their bodyguard. He's a Maine Coon (we think; he was a stray, like all our cats), so he's HUGE and well capable of filling that role! He's also very loyal to my parents, and displays what seems almost like gratitude, just like my cats do with me.

I like the idea of reading sutras to them. Next time one of them curls up into my lap, I will probably tell them about their Buddha nature.

No worries, your torties have exactly the karma they need and really don't need help. If you wish to do mantra, do it for yourself... with them as the inspiration. Cats are good teachers of mantra, as energy and they'll bring it out in you.

Torties have an amazing ability to connect with ppl and have an attitude... best to understand that. I had a Tortie for 17 years, she was the best... we never needed words. Here's Sheba... she was born in the wild. I was the first human to pick her up at about 7-8 months... her mama was clearly tame and had a home once, so Sheba took a while, but she was never feral.

‘My little bodhicattva,’ he will sometimes say playfully . . .

The Prologue and Chapter One of The Dalai Lama’s Cat can be read here.

Ambrosius80 wrote:I think our cats are proof enough that all animals indeed have a buddha nature.

Oh yeah, there's no doubt in my mind about that.
"He who walks in the eightfold noble path with unswerving determination is sure to reach Nirvana." Buddha
Top

When I was living with my sister and niece, they had a cat (they still have it). I often use to do metta (lovingkindness) meditation with Sammy laying in the circle of my arms. I saw Sammy on Sunday, he came up and laid on my shoulder and licked my nose. I always added metta for Sammy when I did the meditation!
http://www.chatzy.com/25904628501622
Top

So wonderful you posted this. .

I came here wishing to share this, and here is the perfect place, as it's a thread already about cats..

There are some facts about nature that simply. . . no words.


"May our heart's garden of awakening bloom with hundreds of flowers." - Thich Nhat Hanh

Users browsing this forum: No registered users and 15 guests